Abby Williams, Indian Trail Middle School seventh grader, was awarded the 2022 Vincent Legacy Scholarship from Starlight Theatre. Each $2,500 scholarship is administered by the Starlight Community Engagement Department, and funds are applied to the scholarship recipients’ performing arts training during their middle and high school years.

To be considered for this scholarship, Williams had a strong interest in community service, wrote an essay, choreographed and performed a dance routine to audition and participated in an interview.

Starlight representatives including Vice President of Community Engagement Alex Jones, Vice President of Philanthropy Lindsey Rood-Clifford, and Greg Reid, Starlight Theater board member and founder of the scholarship, presented Williams with the award in front of her classmates.

KC Scholars is an organization that creates life-changing opportunities for thousands of individuals and is positively transforming the region’s workforce and economy by continuing its support for postsecondary attainment.

“The Blue Star Awards are a great recognition of the Olathe musical theatre programs,” high school theatre facilitator Dustin Pence said. “We are so proud to be represented this year by some amazing shows and students. Congratulations to Brandon and Molly. You both represented Olathe well. We know you will put your scholarships to good use and we look forward to seeing the wonderful things in store for both of you.”

During the Blue Star Awards, the following individuals and groups performed a piece from their respective musical due to their nomination in a top category:

The Association of School Business Officials International (ASBO) recognized Olathe Public Schools for excellence in budget presentation with the Meritorious Budget Award (MBA) for the 2021-22 budget year. The MBA promotes and recognizes best budget presentation practices in school districts. Participants submit their applications and budget documents to a panel of school financial professionals who review the materials for compliance with the MBA Criteria Checklist and other requirements. The panel also provides expert feedback that districts can use to improve their budget documents.

"We are proud to receive the prestigious Meritorious Budget Award from ASBO,” said Deputy Superintendent John Hutchison. “As a district, we recognize our important responsibility to be good stewards of our taxpayer dollars, and the MBA is a true reflection of Olathe Public Schools’ commitment to fiscal integrity and longstanding record of strong fiscal budgeting practices. We have participated in the MBA program for 25 years, and this award provides independent validation that our district utilizes best practices in presenting a transparent budget.”

Visit the ASBO International website to learn more about the program.

All five high schools were represented in the list of KC Scholar-Athletes presented by The Kansas City Star and the Kansas City Royals. School officials were encouraged to nominate as many as three student athletes. All candidates’ portfolios for athletic and academic skills, along with their community service, were reviewed through three rounds of independent judging conducted by KC Star staffers; members of the Chiefs, Royals, Sporting KC, and KC Current; and longtime former Star sportswriter Randy Covitz. The following students were named KC Scholar-Athletes:

Olathe East High School 2022 graduate Will Whitehead received a 4.41 GPA on a weighted 4.0 scale, placing him ninth in his class of 506 students. He finished third in 2021 state cross country, and qualified for state in 2019. He is a 2021 4x800 state medalist. He received four letters in cross country and track. He was the National Honor Society president and a member of the Spanish National Honor Society, marching band and symphonic band. Whitehead plans to attend Kansas State University.

Olathe North High School 2022 graduate Kaylee Tobaben earned a 4.48 GPA on a weighted 4.0 scale, ranking her 20th in her class of 427 students. She earned four cross country letters and three track letters, as well as spots on four all-state teams, three all-metro teams, two academic all-state teams. She earned all-metro and all-state in 2021, placed third at state in the 3,200 and fifth in the 1,600. She was a member of Student Council, National Arts Honors Society and Distinguished Scholar Academy. Tobaben plans to attend Iowa State University.

Olathe Northwest High School 2022 graduate Cole Abendroth received a 4.36 GPA on a weighted 4.0 scale, earning him the 17th spot in a class of 429 students. He received three soccer letters, one tennis letter and was named to second-team all-state and first-team all-conference. Abendroth plans to attend college in the fall.

Olathe South High School 2022 graduate Matthew Tolman received a 4.53 GPA on a weighted 4.0 scale, which placed him second in his class of 496 students. He earned four letters in cross country and three letters in track and field. He was a member of the 2021 state championship cross country team, all metro first-team in 2021, and finished sixth at state to earn all-state honors. He was a member of the National Honor Society and a Governor’s Scholar. Tolman plans to attend Creighton University.

Olathe South High School 2022 graduate Ryan Powell received a $2,000 scholarship from the National Future Farmers of America Foundation to assist with his future education at a two-year or four-year institution. He was one of 43 members across the state of Kansas to receive a scholarship at the 94th Kansas FFA Convention in June.

Powell graduated from the Olathe Advanced Technical Center Animal Science and Research program facilitated by instructor Mandi Holsten. He plans to attend Kansas State University in the fall for Animal Science and Industry with the potential of pursuing pre-veterinary science. In addition, he will also be serving with the 190th Air Refueling Wing, a unit of the Kansas Air National Guard following graduation of basic military training and technical school this summer.

Kate Meives, Olathe East High School junior, was named one of 10 finalists in the KC SuperStar competition. This “American Idol” inspired high school singing competition is produced by The Jewish Community Center of Greater Kansas City and awards over $22,000 in scholarships to the top 10 singers. As a finalist, Meives will continue to the final stage of the competition which will take place on Sunday, Aug. 28 at Yardley Hall of the Carlsen Center at Johnson County Community College. The overall winner will receive a $10,000 scholarship, second place will earn a $5,000 scholarship, third place a $2,500 scholarship, fourth place a $1,000 scholarship, and all other finalists receive financial scholarships.

Olathe East High School junior Easton Logback was named runner-up and top speaker in the Lincoln-Douglas debate at the National Speech and Debate Tournament. He is the first Kansan to ever compete in the national Lincoln-Douglas finals and the first Olathe student to be an event-finalist since the 1980s. In addition, Olathe East received a Debate School of Excellence Award and Jylon Hollinshed, Olathe East 2022 graduate, was named as a semifinalist in the Original Spoken Word category. 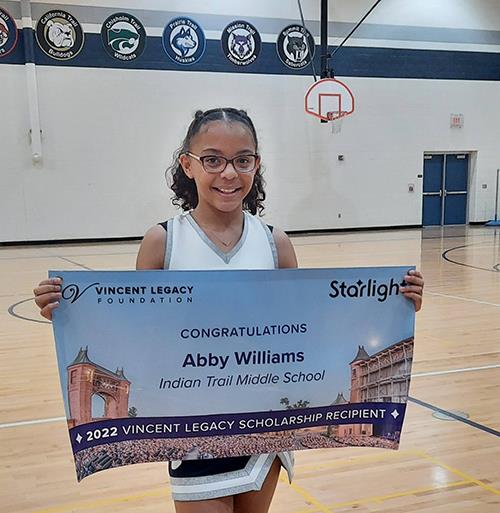 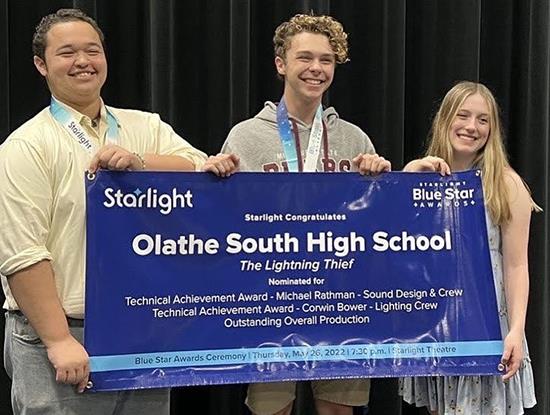 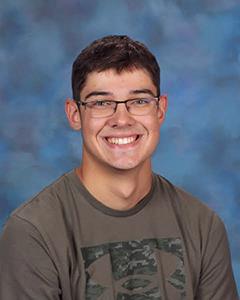 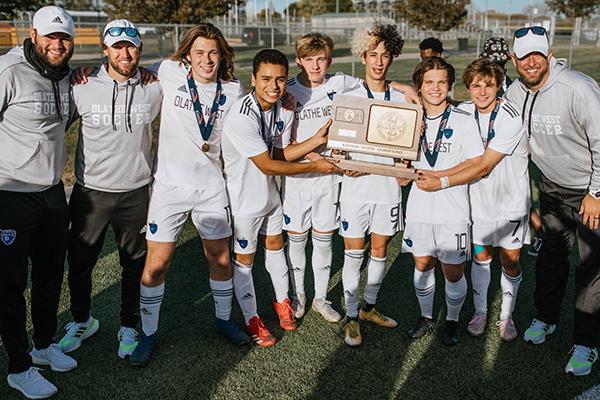 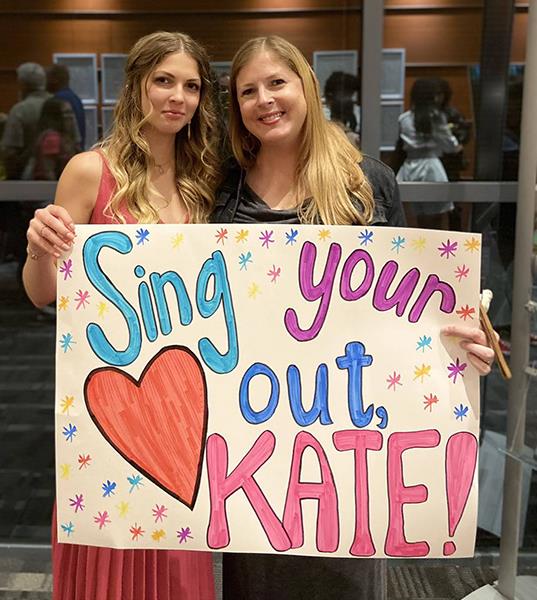 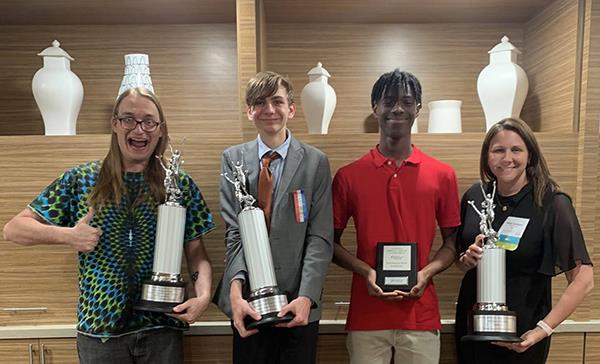